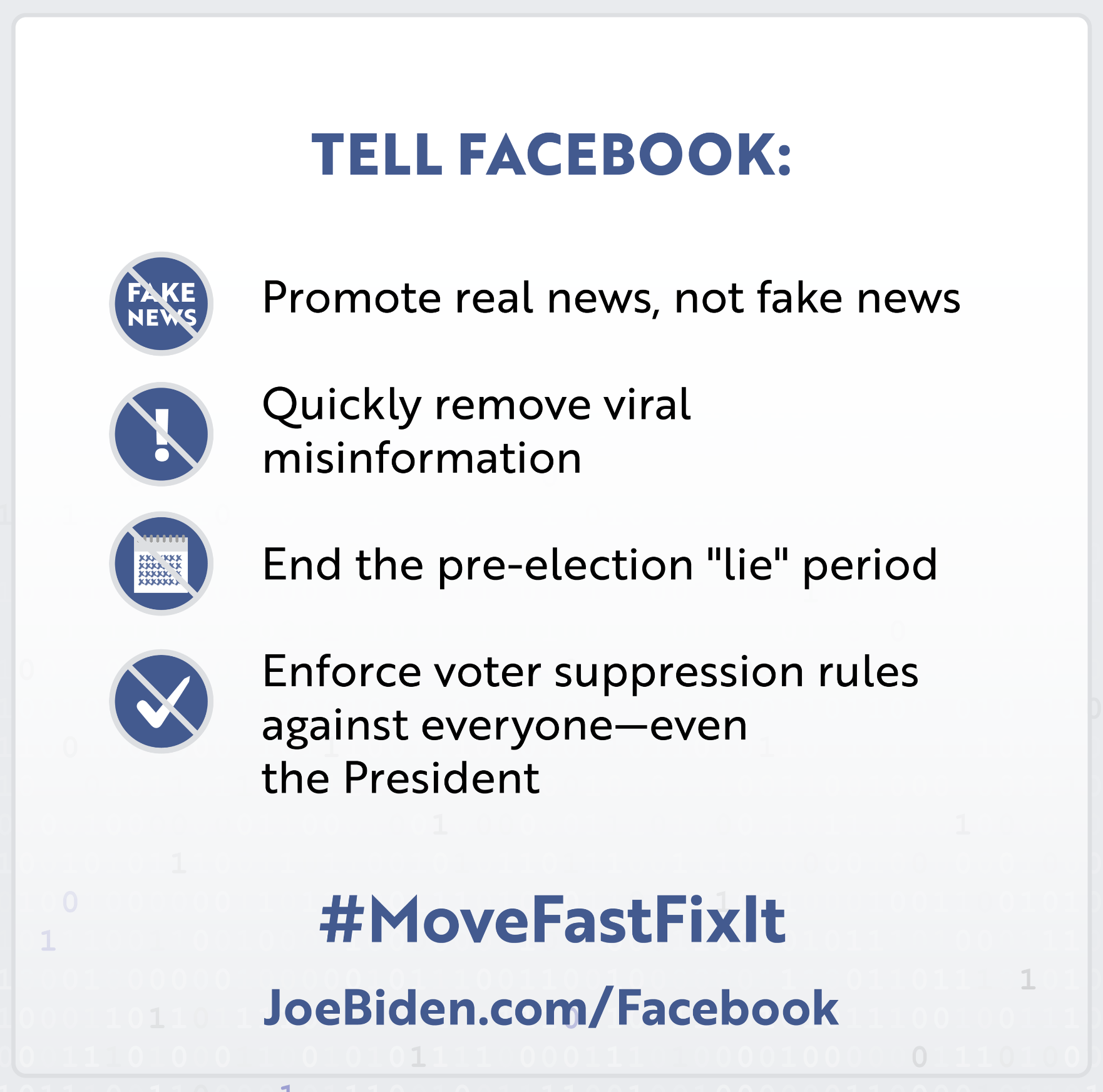 After foreign operatives and rightwing trolls used Facebook to hack the 2016 election, Facebook vowed “never again” and promised to take action.  But with fewer than 5 months until the 2020 election, Facebook seems to be on a crash course to let the same mistakes happen again. Tens of millions of Americans rely on Facebook as a news source. But the company continues to amplify misinformation and lets candidates pay to target and confuse voters with lies.

We have asked Facebook to take action–responsible action, action that is critical to the health of our democracy. And we will continue to do so. We will not stop.

Our asks are pretty simple:

We’re now less than 150 days to the election. The time for setting, testing, and implementing meaningful policy to protect our elections is running out. We need to move fast and fix Facebook now. Help us make it happen by signing and sharing our petition below.

Signed the petition? Tweeted? You can also slide into Facebook’s DMs and ask what they are doing, by clicking here on your desktop.

You can also use the copy below:

In 2016, we saw what happens when social media platforms allow disinformation to run rampant. It places the integrity of our elections at risk. As a voter, protecting our elections and democracy is top priority for me, so I’m asking: what are you doing to face-check political advertisements before they are permitted to run? What policies have you enacted since 2016 that stop the spread of misinformation?

I am calling on you to make clear rules — applied to everyone, including Donald Trump — that prohibit threatening behavior and the spread of misinformation. Please let the public know what your plan to enact these policies is.

Over the past year, the Biden for President campaign has called on Facebook to meet the commitment the company made after 2016 — to use its platform to improve American democracy rather than as a tool to spread disinformation that undermines our elections. The campaign has proposed meaningful ways to check disinformation on your platform and to limit the effect of false ads.

But Facebook has taken no meaningful action. It continues to allow Donald Trump to say anything — and to pay to ensure that his wild claims reach millions of voters.  SuperPACs and other dark money groups are following his example. Trump and his allies have used Facebook to spread fear and misleading information about voting, attempting to compromise the means of holding power to account: our voices and our ballot boxes. Read the full letter >>